Electric Corby has won a Silver Green Apple Built Environment Award, in the international campaign to find the greenest companies, councils and communities. 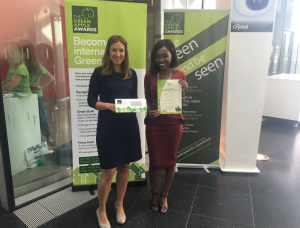 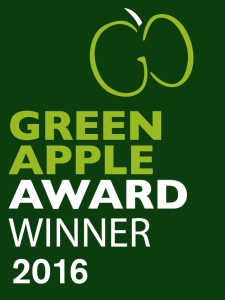 This has been in recognition of the projects Electric Corby has in place to ensure that Corby, the fastest growing town in the UK benefits from the continuous economic change and grows in a way that meets the challenges of climate change. Corby has been named by the Office for National Statistics as the fastest-growing borough outside London, with a population that is expected to surge by nearly 17% to 76,400 by 2024.

Electric Corby competed against more than 100 other nominations and were presented by the National organiser of The Green Organisation, Roger Wolens, at a glittering presentation ceremony at The Crystal in London, a building renowned for its sustainable design.

Nick Bolton, Co-Founder of Electric Corby, said the company is ‘excited and encouraged’ by being able to receive the Green Apple Award this year, especially when we have competed against more than 100 other nominations. He went on to say that “Our projects are always striving to put in place services and opportunities for businesses and local members of Corby to continue to grow sustainably and winning a Silver Green Apple Award, highlights this. We are proud to see our projects within the Corby community being highlighted and this award showcases the importance of the projects that we have in place and their impact on the local community.”

As a result of this Green Apple Award success, Electric Corby have been invited to have their winning paper published in The Green Book, the leading international work of reference on environmental best practice, so that others around the world can follow their example and learn from their achievement. They could also progress to represent their country in the Green World Awards, and the European Business Awards for the Environment.

For more information about the Green Apple Award visit http://www.thegreenorganisation.info/